Nannochloropsis Gaditana is extremely tiny, 9 times smaller than a red blood cell. There is no known food, which is smaller in size — yet, there is so much life energy stored in this single cell. It has the ability to multiply and proliferate exponentially, producing trillions of healthy cells that humans need to maintain and restore health.

It’s this rare combination and proportion of elements and nutrients that makes this strain of marine phytoplankton unique and highly effective in enabling cellular regeneration and healing.

Supplementing with phytoplankton can strengthen cell membranes and trigger your body to regenerate current cells and create healthy new cells. A team of European botanists, doctors and microbiologists discovered an incredible strain of marine phytoplankton that’s said to hold the greatest nutritional value for human consumption.

Nannochloropsis gaditana, and it’s pretty mind-blowing how such a tiny organism — many times smaller than a red blood cell — can hold such amazing health-giving power.  Nannochloropsis gaditana is able to multiply explosively, which is why it’s believed it can help humans restore their health so quickly at a cellular level.

Nannochloropsis phytoplankton is a genus of algae comprising 6 known species. 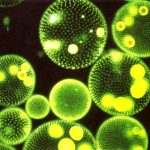 The species currently recognized are:

It has raised growing interest also for the investigation of biofuel production from photosynthetic organisms.

Nannochloropsis is actually served at Restaurant “A Poniente” of El Puerto de Santa María (Cádiz, Spain) close to the natural environment where Nannochloropsis gaditana was first isolated and still grows