MyPlankton just had to have Ginger!

When we created  MyPlankton ™ Mother Nature’s Nutrition, we could not contemplate not adding Ginger…

Ginger Alleviates Pain
According to a study conducted at the University of Georgia, the regular ginger supplementation alleviated muscle pain by 25%. Moreover, this miraculous root may also soothe the pain during menstrual cycles, and it has been found to lower the progression of muscle pain.

Ginger Relieves Digestive Issues
Ginger contains phenolic compounds which soothe irritation in the gastrointestinal tract Moreover, they trigger the production of bile and saliva and thus help the passing of food and fluids through the GI tract. A study which involved 24 healthy individuals, showed that the consumption of 1.2 grams of ginger powder before meals speeds up the emptying of the stomach, thus reducing indigestion by 50%.

Ginger fights Inflammation
Osteoarthritis is a common issue which represents the joint degeneration, which leads to stiffness and pain in the joints. A recent research involved 247 people with knee osteoarthritis and showed that the ones who consumed ginger needed less medication and their pain was significantly reduced.

Research suggests that ginger contains antioxidants and bioactive compounds which have powerful inflammatory responses that occur in the brain. One study conducted on 60 middle-aged women showed that the extract of ginger enhances the working memory and reaction time, meaning that it promotes brain health in various ways.

Ginger Relieves Nausea
The consumption of ginger tea or raw ginger is an effective nausea remedy, especially in the case of pregnancy, morning sickness, and cancer 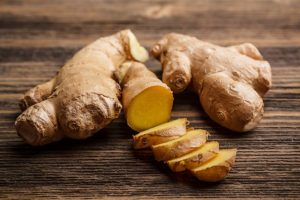 treatments. According to a review of 12 studies which involved 1,278 pregnant women, 1.1-1.5 grams of ginger greatly reduced nausea.

Ginger lowers the Risk of Heart Disease
High blood sugar is the main risk factor for heart disease. A recent study which involved participants with type 2 diabetes, showed 2 grams of ginger powder on a daily basis reduced blood sugar and caused a 10% overall reduction in 3 months, meaning that it can reduce your heart disease risk by at least 10%.

Ginger has Anti-Cancer Properties
Ginger contains a substance called 6-gingerol which has been a subject of numerous studies as a potential alternative cancer treatment. One study found that 2 grams of ginger extract on a daily basis reduced the pro-inflammatory signaling molecules in the colon.

Ginger has been used as a food and a medicine since ancient times and we sourced only the best ingredients for MyPlankton. The use of Ginger in China dates back over 2500 years, and it is known to have had a prominent role in Indian and Japanese medicine since at least the 1500s.

‘ MyPlankton ™ Mother Nature’s Nutrition’ boasts a “Synergistic” group of foods that include Ginger which together magnify the best outcome in a natural health supplement.