The Secret To How Whales Live To 100

The Longest Living Creatures On The Planet

Whales, the majestic creatures of the deep, are one of the longest living animals on the planet. It is known that some species of these beautiful marine mammals live over 100 years, with the bowhead whale’s lifespan estimated between 100 – 200 years.

So, what’s the secret to the longevity of the whale?  One word – phytoplankton.

Phytoplankton is nourishment of the sea, and in fact nourishment to nearly all life on earth. Marine phytoplankton is found within the smallest drop of sea water. These single-celled, microalgae swarm at the top of the oceans, gaining their energy from the sun by using the method of photosynthesis. Classified as ‘producers’, they create their own food supply, converting nutrients and carbon dioxide into organic compounds. Phytoplankton are chief producers of the organic carbon required by every animal calling their home the ocean.

Marine phytoplankton is micronutrition at a cellular level, providing more nutrient-packed power than all the other superfoods combined. The microalgae contain all of the sustainable nutritional molecules known throughout the entire flora, fauna and human realm. The molecules, five times smaller than your red blood cells, are absorbed directly into your bloodstream and offering up their benefits almost instantly! 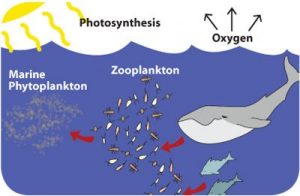